Can Our Thoughts Really Destroy or Heal Us? 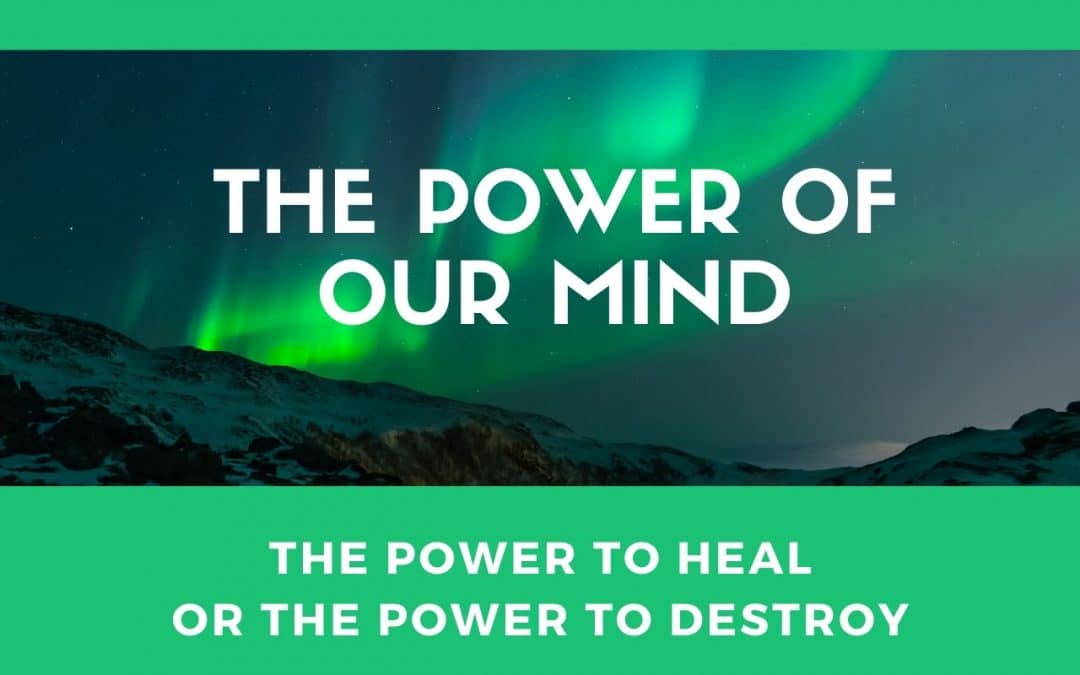 I have been reading much about mind over matter or the power of the mind over the body. In our 21st century, science and spirituality are beginning to collide and coalesce to bring us new insights that rock the foundations of old-fashioned Newtonian cause and effect and traditional medicine where the brain was only considered a part of our central nervous system and nothing more.

Einstein would have been proud to know that we are now embracing the new age of quantum physics. This encapsulates the idea that our thoughts project energy waves which have a vibrational frequency which can alter the physical and chemical properties of an atom. And electromagnetic energy signals can travel at a speed of 186,000 miles per second, whilst the speed of a diffusible chemical (whether produced by our own body or one synthetically introduced by drugs), travels at one centimetre per second (“Biology of Belief“, Dr Bruce Lipton). This is the fundamental tenet of the Law of Attraction: our energy flow or our energy vibration is controlled by our thoughts which in turn can alter our reality: “The mind is everything. What we think, we become.” (Buddha)

In terms of the reality of our body, it is the quality of our thoughts and associated emotions (since the heart has an electromagnetic signature 5,000 times more powerful than the brain according to the HeartMath Institute), which is the deciding factor in how our health is affected and impacted.

In his book “Innercise” John Assaraf refers to our subconscious brain as our Gorilla brain. Whilst on the one hand, this brain keeps our automatic bodily functions going, such as breathing, digesting, etc, it is also our ancient brain that keeps us in high alert or in a state of ever-present fear, ready to avoid the next pouncing sabre-toothed tiger. In our modern age, however, this autonomic response is no longer serving us. We remain forever poised to fight, flee from threats or freeze whenever challenge or when something pulls us outside our comfort zone.

The flight, fight and freeze response results in the trigger of the HPA axis (Hypothalamus-Pituitary-Adrenal axis) and the inhibition of growth-related functions. Blood flows to the limbs to extract us from harm’s reach, but stops the visceral organs from doing their life-sustaining work of digestion, absorption, excretion and other functions that contribute to the growth of the cells and the production of the body’s energy reserves. We literally end up depleted and run-down (which if sustained can lead to Chronic Fatigue Syndrome). When the adrenal hormones (adrenaline and cortisol) ramp up, our immune has to shut down as it requires lots of energy reserves. This exposes the body to potentially dangerous bacteria and viruses. In fact, stress hormones are so effective at inhibiting our immune system that doctors provide them to transplant patients so that their immune system won’t reject the foreign organs.

Chronic stress through the dysfunction of the Glucocorticoid Receptor Resistance (GCR) can also heighten our inflammatory responses, leading to greater risk of asthma and other autoimmune diseases, and spurring the onset of chronic inflammatory diseases, such as cardiovascular disease, cancer and type 2 diabetes. GCR is associated with people who experience chronic stress, such as parents of children suffering from cancer, spouses of brain cancer patients and persons reporting high levels of loneliness (Cohen, et al, 2012). Similarly, depression, a modern scourge, happens when the brain’s stress apparatus goes into overdrive. Depression is a multi-layer phenomenon. It traces back to anger directed at self, then to sadness and then reverts to the basest emotion of fear. That fear spectre raises its ugly head again.

The power of the mind to heal or destroy therefore lies in unlocking the door to the subconscious and in curtailing the flight or fight syndrome. That is why energy healing and energy elevation practices, such as meditation, mindfulness, affirmations, NLP (neuro-linguistic programming), EFT (Emotional Freedom Techniques or tapping therapy), (laughter) yoga, diaphragmatic breathing, prayer, hypnosis, acupuncture and the Energy Alignment Method (a new energy transformation therapy that I am trained in) are becoming increasingly popular. This is because they can still the conscious mind sufficiently that we can more readily access the subconscious mind and re-direct or re-program its energy pulses away from fear towards the higher, positive frequency of peace and love. This creates a “relaxation response” in the body (as explored by Herbert Benson in his eponymous book from the 1970s) that counters stress conditions of hypertension, anxiety, being overweight, diabetes and ageing. By feeling and thinking more positively, our body also secretes endorphins which reduce pain and increase pleasure.

The power of the mind cannot be over-estimated. Many years ago, a Reader’s Digest article featured the true story of Nick Sitzman, who was a strong, healthy and ambitious young railroad yardman. He was diligent at his work and a devoted husband and father of two children. On a midsummer day, the train crews were allowed to clock off early to celebrate the foreman’s birthday. Whilst performing one last check on some of the railroad cars, Nick was accidentally locked in a refrigerator boxcar. When he realised the rest of his crew had left the site, he began to panic. He banged and shouted to no avail and until his fists were bloody and his voice hoarse. He then started worrying that he would freeze to death, guessing that the temperature would plummet to zero degrees Fahrenheit. So he kept thinking, “If I can’t get out, I’ll freeze to death in here”. He found a knife and sketched a message to his wife and family on the wooden floor “It’s so cold, my body is getting numb. If I could just go to sleep. These may be my last words”. The next morning, the crew slid open the heavy doors of the boxcar and found Nick dead. An autopsy revealed that every physical sign of his body indicated that he had frozen to death and yet the refrigeration unit of the car had been inoperative and the temperature inside was only recorded at 55 degrees Fahrenheit. Nick had literally killed himself by the power of his own thoughts. (Summarised from Jack Canfield’s The Success Principles).

Conversely, you can use your mind to heal. Dr Joseph Murphy has recorded many episodes of healing and recovery using the power of the mind in his book “The Power of Your Subconscious Mind“. He includes lots of affirmations that can release the kinetic action of the subconscious mind to heal the body. Another high profile author and motivational speaker was Louise Hay, who wrote “You Can Heal Your Life“. Her key messages are: “If we are willing to do the mental work, almost anything can be healed” and “You have all the answers within you”. She demonstrated this first hand by changing the state of her mind to heal herself from cancer. I can thoroughly recommend the following talk she has given about changing and transitioning ourselves. Listen here.

Another interesting read is “Molecules of Emotion” from Dr Candice Pert. She emphasises the healing power of touch in creating a doorway to the mind. She refers to this as Body Psychotherapy. This is one of the reasons why myself and my colleague Angela, harp on about the importance of self-care and in particular having regular massage and reflexology treatments. They do much to increase our energetic vibrations: to heal our feelings and therefore our minds. They give our body an emotional release that is cathartic, such that an “ounce of prevention is worth a pound of cure” (Benjamin Franklin).

We offer a 12-month membership programme that makes it affordable and attractive to have regular monthly treatments with incentives of free treatments and products. If interested in finding out more, please contact us.

Receive our latest news and offers

Before you book, please check out our Covid-19 page. Please note we use cookies to ensure that we give you the best experience on our website. If you continue to use this site we will assume that you are happy with it.OkCookies Policy